Some Quick Bytes On The NCER

I wanted to resume my blogging on something else, but thought to do a 'quick' commentary on a current economic mego-project first. The Northern Corridor Economic Region (NCER) - a new mega project - was launched yesterday. Some observations:


On a more petty side, I take great offense in the picture here showing Kedah to be much smaller than North Perak. Most insulting to us Kedahans! 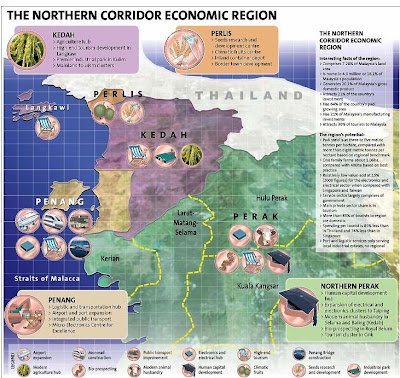 The verdict is nonetheless a big tick compared to efforts of the past efforts by the Lah-ist regime. Thankfully, as they can't convert the NCER name to refer to 3 Sultans simultaneously (at least my non-Oxbridge brain can't!) and as they are also not likely to involve the outdated walking PR disaster that is Musa Derhaka in this, they should be able to avoid boo-boos that continue to dog the ever-unfortunate SJER.

Will Tun Dr M be considered to chair the committee equivalent to Musa's down south?


After my last posting, a fellow Promudan challenged my cynicism towards the IDR, citing the government's intention for IDR to emulate the the Pan-Pearl River Delta Development in China; where Singapore plays the role of Hong Kong and IDR region that of the mainland provinces of South China.

At this stage, allow me to begin referring to the IDR by its old name, the SJER or South Johor Economic Region. The reasons for this I will present later.

I actually do not agree that the SJER emulates the critical elements of Pan-Pearl River Delta Development. Those who equate then have accidentally, or by choice,ignored the following factors:
But as I said before... Singapore should not matter so much...

As I'm busy with a new baby and now with my sister's coming wedding, I'll keep a running brief on this piece and perhaps update it from this stage onwards as and when info, understanding and opinion gels.

So, why do I wish to still refer to the IDR as the SJER. Well the reasons are:
One last running word on the NEP thing - I don't see why the NEP and its removal or otherwise is such a big deal where attracting FDI is concerned. In truth, EU commissioners like Rommel have something to complain about all ASEAN countries - Indonesian corruption, Thai's military, Philippines' gunpowder democracy, even Singapore's authoritarianism.

In the end, NEP had not been able to deter investment in Malaysia throughout the 70's through to even post 2000. Why should it 'magically' be factor now? The outside investors just don't care about our social-engineering agenda - as long as their investments are not risked by it... Is there anyone out there selling the story that the NEP puts investor's good money at risk...? Who...?

A discussion on the Promuda Circle on our Foreign Direct Investment (FDI) performance (which can be tracked by even non-members from this link) has such potential that I'm taking a break from my new baby. (Yes, the another son of mine has arrived, Alhamdulillah!)

Of the matters not yet said on the discussion at the Circle, which also explored the issue of Malaysia's competitiveness vs China and Singapore, I put forth the following to be noted in discussions on FDIs:
Perhaps Singapore behaves this way on behalf of LKY, who's ego likely suffers from the fact that he had never been considered the leader of the ASEAN or South East Asian nations when two of his Malaysian rivals (Malays to boot!) had been seen as such; Tunku Abdul Rahman (with MaPhilIndo and the Konfrantasi) and Tun Dr Mahathir (when he pushed for EAEC which resulted in ASEAN+/EAEG being formed regionally and APEC being formed by the US as a counter).
Please note that from the outset I assume that we are trying to attract the right sort of FDI, the type that will result in Greenfield economic development, not simply selling Malaysian companies to foreigners (individuals and entities) and calling them FDI!

In the end, Malaysians should consider the following 2 approaches to enhancing our attractiveness to the right form of FDI:
The factors that erode our value as an FDI destination include:The Singapore factor is only a factor as long as we allow it to be a factor. In the end, Singapore should not matter. Else, Tunku Abdul Rahman would not have thought its 'value' to be insufficient to compensate for its bothersome leaders, leading him to expel Singapore from the Federation for the greater good of Malaysia!

It hence continues to puzzle me why the Lah-ist regime is so hard-up for Singapore to participate in the IDR? In fact, why have an IDR at all? I would have thought North Perak or the Malaysia-Thai Border or perhaps Sarawak from Sibu to the interior deserves more development focus than the IDR. Could it be because Singapore sees no benefit from developing these other regions? Why should it matter what Singapore thinks about Malaysia's priorities?