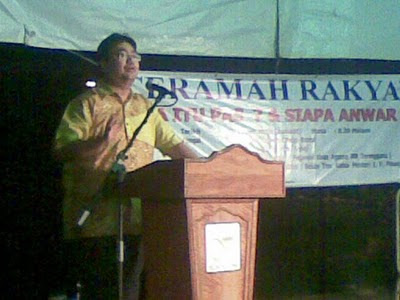 Why BN And 1Malaysia 'Lost' In Hulu Selangor

I'm going to be 'punished' for this posting, especially by those who read the title only and choose to draw conclusions without reading further. They will likely be joined by 'kaki ampus' as well. However, as much as the Hulu Selangor by-election win by BN was a welcome result, the victory carries reminders of a similar by-election some 3 years ago, in Ijok, where a local boy from the MIC also once trounced a PKR 'Giant'.
This posting will not touch on how BN's machinery assured a win ahead of Pakatan's 'meagre' means, which will be among Pakatan's excuses. Time and again previously, BN had been losing by-elections despite its large machinery. In fact, in Bagan Pinang, the BN candidate's machinery drove things ahead of BN's own. And of course all who were present at Hulu Selangor and even Bagan Pinang would agree that Pakatan's recources are now far from meagre. So, moot...
This posting also will not talk about the quality of candidates. It was rather obvious that Sdr. Kamalanathan would be more appealing to locals than Datuk Zaid Ibrahim. Kamal is quite a personable fellow, humble yet with intelligence discernable beneath his warm smile. So, despite being an 'unknown', it would be easier for fence-sitters who wish for a Wakil Rakyat that connects with them to Kamal ahead of the rather aloof and 'superior' Datuk Zaid Ibrahim.
This posting is meant to highlight that the reason for the small majority in this BN by-election victory, hence my conclusion that it was a 'loss' is the poor quality of voters that we may have in Malaysia. Why would I deem these voters of poor quality for the job of deciding their Parliamentarian? I'll present a few anecdotes with the hope you will draw the same conclusions:

BN may have won this by-election battle, but they have not won the war for the hearts and minds of the Rakyat. Remember that the PKR they were battling is no stronger, and if anything, is much weaker than the one that beat BN for the Parliamentary seat in 2008. Nevertheless, despite policies meant to cure BN of many of the perceptions of the electorate towards it, such as 1Malaysia, BN's win is surprisingly small.

There is an Arabic word, asabiyyah, which is often given a negative context as tribalism, clannishness, nationalism and indeed... racism. Ironically, the concept of asabiyyah according to Ibnu Khaldun, the great Muslim thinker, is not necessarily negative as it exists as a driving force for communities to develop with social cohesion towards civilisation. However, asabiyyah become truly negative when it is applied to the detriment of other groups, tribes or races.

Much of the racism in this country is spread by PAS, Gerakan and DAP. These parties don't do it necessarily by practicing racism, but more by labeling BN's predominantly race-based or regional then race based parties as racist! They do so by labeling UMNO, MCA, MIC and other BN partners as practisioners of negative asabiyyah. They should instead highlight that why BN is made up that way is to reflect the reality on the ground, that we still cluster in racial groups.

To some extent, despite near sectarian propaganda attacks, most viciously by PAS, Gerakan and DAP pre-May 13, 1969 then repeatedly over the course of the 80's and 90's, BN has been able to hold fast against the onslaught as the many communities are convinced that for Malaysia to succeed, all races must cooperate, just as their political leaders do in BN. However, this message failed in the dark Pak Lah years. Racism is now rampant again at the ballot box.

How does the BN government address this? It is ironic that despite being the party trying to resolve multi-racial tensions that it and its components are the ones labeled racist! Coversely, Pakatan appear could be as negatively asabiyyah as they like without blame! The blame was repeated time and again at Hulu Selangor, when voters were repeatedly reminded that the DAP dominated exco curtailed the BN building of an ITM, an institution to directly benefit Bumiputras.

Such blame may be an effort to shine truth to who is really racist. However, it is disagreeable to me that such truth is revealed and emphasised to Malays, inciting their group anger towards a Malay MB led by the nose by Chinese DAP state exco members. In a sense, the revealing of truth of Pakatan's racism is in itself an act of racism when done this way. Racism here begets racism!

On the Chinese side, there were whispers coming to me, some conveyed in apparent triumph, of non-Malay anger, when Kamalanathan met with Perkasa. Supposedly, this incident would shift votes from the Indian firmly towards PKR, threatening BN's position. The impression given by these whispers are that the Chinese like to keep Selangor as it is, with an MB led by the nose by Chinese DAP exco members. The impression also was that Indians didn't like Perkasa.

But really, if we are truly buying into 1Malaysia, what is so wrong with Kamalanathan meeting with Perkasa? As a future Parliamentarian, surely he has to be open to the views of Malay pressure groups as well, even supposedly 'ultra' ones like Perkasa. What's so different with Kamalanathan then meeting with Dong Jiao Zong? Oh, can't Malays have extreme pressure groups and NGOs like Dong Jiao Zong to further the Malay cause?

Maybe there would have been greater happiness if Kamalanathan met with Hindraf? Sure, Hindraf is proven to be violent in conduct, but hey, Kamalanathan is an Indian, so of course he should speak to Hindraf, right?

All this is sick! Kamalanathan is now Parliamentarian for all of Hulu Selangor and will make a difference to national policy-making, so... he should take in ALL points of view, whether it be Malay, Chinese, Indian, Murut, Iban etc.So what if he meets Perkasa? is it such a sin that he wants to know what Malays want? Isn't it responsible for him to do so as he move towards 1Malaysia.

In the end, what sickens me about the events and outcome at Hulu Selangor is this. The winner is not an only an Indian from MIC but a Malaysian from BN representing all Hulu Selangor voters in Parliament. Problem is, how many voters still see him as an Indian from MIC? Problem is, how many struggled to vote for him because of despite of this? Until our voters improve in quality such that race is not front and centre of their concerns, we would never have 1Malaysia...

How Important Is The Hulu Selangor By-Election?

I have only managed to get 2 hours sleep overnight. yesterday was a little better at about 5 hours, but have been driving incessantly over the last 2 days. Am glad I took leave Thursday and Friday as was feeling quite run-down, but I certainly cannot blame the work telecons I still dialed into yesterday if I come in exhausted and late on Monday.
The driving has been incessant as the person who I would usually share the burden of these tasks has had knee problems. Have had to organise food primarily, with so many people coming. And as usual, we've had to cater for a variety of palates; not too much spicy or savoury, not too much sweet, not too heavy... and of course, it doesn't help that we still haven't got a maid...
Maid? Hulu Selangor? What the?
Actually, I'm not in Hulu Selangor today, in line with my view of the pointlessness of 'penamaan calon' as an exercise in support of the party's chances of winning an election. It may help boost the morale of the candidate and party workers, sure, but I have my son's birthday party to worry about today... yes, I have been busy with that, buying food, getting stuff, running around as my wife has to do less. All the above has nothing to do with any PRK.
So, what do I think of this coming PRK? I have no reason not to be consistent where a pattern is set - it isn't really relevant! Both sides may wish to make of it more than it is; proof of 1Malaysia's acceptance, or not, proof of Pakatan support in Selangor, or not. Unfortunately, the proof is IN the pudding, as they say, and frankly, both sides have not shown any 'proof'! OK, BN is ahead due to some developments like 1Malaysia and the NEM whilst Pakatan's accident-prone, but...
So, in the end, it is down to... the quality and acceptance of the candidates! In the end, politics is local, so for the locals, the way heart-strings are pulled may well overwhelm any national-level propaganda. And on this I must say, knowing the candidates for who they are, BN is ahead... assuming Zaid is still to be the PKR candidate for this one...
But in the grander scheme of things? I say we wait till there's more meat on the bone to show from both sides... else, in a national context, DS Najib's apparent popularity and DS Anwar's eminent doom nonwithstanding, status quo will likely prevail, for the most part.
Posted by Unknown at 7:05 pm No comments: