I met Fez, the current Chairman of UKEC a few weeks ago and as with previous chairmen and leaders of the organisation before him in its current incarnation, there was much curiosity over how and why it was founded at an AGM in Leicester University on the spring of 1995.

Actually, UKEC was conceptualised much earlier, being the brainchild of 3 individuals from the London School of Economics (LSE), Hirmiadi Don Rahim and Omar Siddiq Amin Noer Rashid who were also founders of Malaysia Club at the LSE and Abdul Rahman Redza, one of the two founders of Project Kalsom (more of this much later).

An abortive attempt at forming UKEC happened in the spring of 1994. However, despite attracting 17 representatives from some 10 universities, the attempt faltered and the 3 decided to re-formulate the founding membership to improve UKEC's chance of success. Rahman withdrew to focus on Kalsom, and Adlan Benan Omar from Cambridge, Munir Majid from Oxford and myself, Akhramsyah Muammar Ubaidah Sanusi of Imperial College, were recruited to the cause in the summer of 1994.

We five were then more generally known as the five founders of UKEC. Our notable successes during the time was securing the then politically retired Tun Daim Zainuddin as Patron, expanding the pro-tem committee across the many Universities of the UK, gaining the trust and support of the Malaysian Students' Department who was then led by Dato' (then Encik) Abdul Rahman Kasbon. A couple of unsung heroes of UKEC's founding were actually (the late) En Aris and En Hamid of MSD who helped us figure out what UKEC was meant to be.

However, it would be too selfish of us to not also acknowledge a few others as founders of UKEC. Badlisyah Ghani and Flora Romeo joined the team in the winter at the end of 1994. Badlisyah was a fierce critic of UKEC at first, but once he understood and bought into our cause became a key contributor, as he and Flora drafted UKEC's constitution based on their reading the UN Charter (both were law students). The two of them also brought UKEC into the sphere of Universities grouped under the Northern Consortium (NCUK), with Badlisyah being from Leeds University and Flora from University of Middlesex.

Lim Chong Han also joined the cause at about the same time via an earlier friendship with Ben. Chong Han brought us a more legitimate Malaysian feel to the whole endeavour, being our first non-Malay founding member, and also a strong enough relationship with the administration of the University of Leicester to offer up its facilities to host our inaugural AGM in the spring of 1995.

There are 3 other notable players whom cannot be missed, Mohd Irman 'Bun' Nawawi who by the time of the AGM was Kalsom's principle driver, Nazrin Hassan, who rose from being Ben's close confidant to later building the cadre system that recruited future UKEC executive committee leaders and eventually becoming a trustee of UKEC's Capital Fund, and Eqhwan Mokhzanee, who played the odd yet challenging role as the youngest member of the committee, all mentioned here were born in 1973 except for him(!), as well as being the incoming first Chairman of UKEC.

There were of course many others who contributed in their own way to UKEC's founding, but those mentioned here are the only ones I and each of us would probably acknowledge unequivocally as founders of UKEC. Our contributions did not end at UKEC's founding though. Ben, Don, Nazrin and I for instance, whilst we walked away from UKEC, battered but satisfied with our work being left in the good hands of Eqhwan, Badlisyah, Flora and Chong Han as the lynchpin of the first committee, could not help but return to assist as part of UKEC's second exco. In fact, the name change from UK Executive Council to UK Eire Council was suggested by Badlisyah just a few years ago!

But the journey to UKEC's foundation has a sweetness to it all of its own. We began the journey as undergraduates in our very early twenties and walked away with lessons of a lifetime. And we can now stand tall and proud to see UKEC continuing to find relevance for Malaysian Students of the current generation.
Published with Blogger-droid v2.0.10
Posted by Unknown at 11:28 am No comments:

Email ThisBlogThis!Share to TwitterShare to FacebookShare to Pinterest
Labels: UKEC 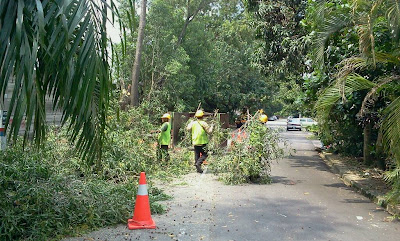 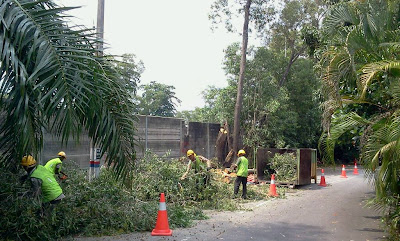 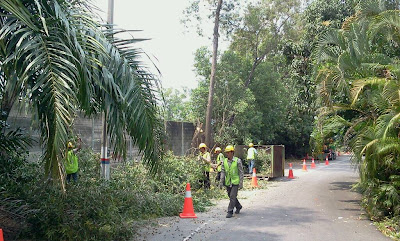 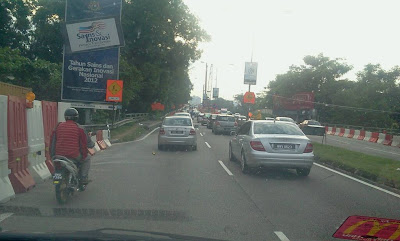 It is a shame that damage caused by mistakes or poor planning of projects can typically only be addressed by the courts once evidence presents itself. Nevertheless, such a state of things does not excuse the authorities or parties involved in projects from themselves taking steps to mitigate from such damage occurring.

In the case of the MRT construction along Pinggir Za'aba, Taman Tun Dr Ismail, evidence is mounting that damage to property and quality of life will be suffered by the neighbourhood is mounting:

1 -  A request by residents to ensure no personnel involved in the construction be allowed on Pinggir Za'aba, agreed to by the CEO Datuk Azhar, which seemed impractical even as promised, had long proven farcical. Even the pathetic offer to set up a hut to assist in managing residents' grouses has not materialised.

2 - Vibration from construction works object the median of Jalan Damansara resulted in automatic gates going faulty at houses about 30 meters away! MRT Co agreed to a vibration study to verify this, then refused to share the results nor compensate those affected.

3 - The photos above show of tree cutting along Pinggir Za'aba. These photos demonstrates how even for the simple act of tree clearing, the project team has obstructed half the street! In fact, the workers set up cones barely a meter or so away from the 6 meter limit which would have forced the government to legally compensate the residents affected or even perform compulsory acquisition!

4 - The traffic community along Jalan Damansara have of course been witness to countless safety near-misses along the MRT construction areas (final image above), with personnel seemingly part of a pathological safety culture; a necessity perhaps following bullish promises by the CEO of MRT Co? (A Pathological Safety Culture is a technical term by the way, denoting the lowest rung of the Safety Culture Ladder)

This blog will continue to collect and as best possible record and share evidence of wrong-doing by MRT Co which we believe will escalate, in part due to the project NOT BEING ON TRACK FOR COMPLETION as claimed by the CEO in recent media reports. Well, at least along Pinggir Za'aba it isn't. The tree felling pictured? They planned that MONTHS ago!

We certainly hope someone in power wakes up to the reality of MRT Co's incompetence soon. We the affected residents have our interest of course, but I am sure the BN government wants to ensure the MRT remains a vote winner and not morph into an election loser!

Email ThisBlogThis!Share to TwitterShare to FacebookShare to Pinterest
Labels: MRT 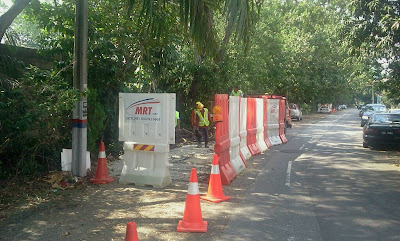 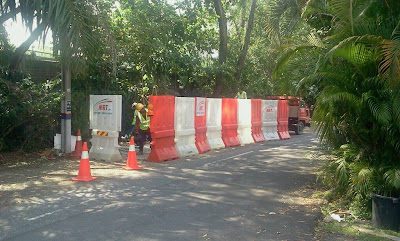 A few days ago, contractors appointed by MRT Co encroached upon Pinggir Za'aba, in direct contravention to the promise of the MRT Co CEO to the residents of the street that no such personnel was to ever set foot on it!

This of course is just the newest addition (actually, not even that new, but this group of workers actually did something to the road!) to the long litany of broken promises and deceptions perpetrated by MRT Co towards residents of Pinggir Za'aba... & I am sure others too.

Residents of Pinggir Za'aba was informed of the impending work, but the promise of an engagement months ago where all risks and mitigation efforts would be shared, promised then by MRT Co's Strategic Comms Director have also been broken, due to lame excuses. Lame excuses indeed considering not engaging the neighbourhood contravenes with the DEIA & is just plain indecent!

Of course, MRT Co may just be trying to keep up with a strong legacy of awfulness begun by SPAD... which began by putting up notices to us residents on trees!!!

Published with Blogger-droid v2.0.9
Posted by Unknown at 10:18 pm No comments: