This blogger had a fun time last night chatting with some friends on the aftermath of PRU13 as well as the new Cabinet formation. One of the first exchanges when I arrived (the others had already gotten going for about half an hour) resulted in the best response I have heard to date to the...

My response was more or less... Hahahahahahaha! It was all in good humour and the discussion lasted for a further 4 hours last night, covering the gamut of why the Chinese voted the way they did away from BN through to understanding the Gen Y's at a level that was quite enriching for this blogger. One of us even got serious enough to 'make plans'!

But seriously, this sort of open conversation that was conducted with comfort among friends of different races (2 Chinese and 4 Malays at varying times) need to continue for our citizens to begin to understand the choices each other made at PRU13. These sort of conversations lie as a bastion against extremist attitudes towards what happened; i.e. the mass abandonment of BN by the Chinese despite the many promises and deeds of  DS Najib.

In the end, we agreed that greater understanding was needed between each other, with a couple of the guys taking note of the need to read San Kuo and the Water Margin as insights to Chinese mentality, and a certain TIMES article on Gen Y being of interest to all. And all also agreed that we really, really hate Corruption and Crime, and wish the cabinet post given to a certain Icon of Corruption proves to be a poison chalice!
Posted by Unknown at 11:41 pm 6 comments:

Making Matters Worse After The Death Of 1Malaysia

Winston Churchill once said that a week is a long time in politics. And so with this in mind, and following a need to rest and re-focus after 10+ days of campaigning (I took a break in middle of first week after nomination day), I left it till today to put down my commentary. Ironically, as I lay these words down, matters, at least at the face of it seems to have gotten worse for DS Najib Tun Razak since the night 1Malaysia 'died'.

Observe the photo below: 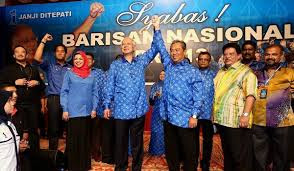 This is an image taken from 'election night', when a rather sombre DS Najib thanked all those who have voted such as to allow BN to continue to govern another term. DS Najib appeared exhausted and his face at the beginning reflected much disappointment. Only on his second round at the mike on the podium did he have a more jubilant smile. I doubt he would smile as wide if he realised be hind him stood 2 individuals initimately linked to his 'loss'.

No one can deny that BN won, albeit by a majority smaller that in 2008. BN won, but DS Najib's mood reflected clearly that he felt he had personally lost! He pretty much admitted to this when in his initial speech that night, I could not recall him saying '1Malaysia', though my mother said he did mention it once, and instead, he very clearly admitted that in large part, the Chinese voters had rejected BN.

In hindsight, this is to me, no surprise. It is no surprise that the Chinese rejected BN and embraced Pakatan Rakyat. Why? It is because:

BN Promised 1Malaysia - which the Chinese Community DID NOT NEED!

Pakatan Rakyat Promised the end of Corruption and Crime - which the Chinese Community has repeatedly demanded!

I choose to judge here at face value and purposely discard all notions of conspiracy which is no less racist than some of the racism exhibited by Chinese politicians during the elections. In the end, even if there were racist leaders driving the Chinese votes in a certain direction, they had to be driven by good intentions, and Corruption and Crime remain as issues still unaddressed by DS Najib's government.

Don't get me wrong, the rhetoric around 1Malaysia is beautiful! Unity, delivery of what the people need by a high performing government, everyone judged by needs and means, not race, religions, creed, all very nice stuff. The problem is that since the arrival of '1Malaysia' products, 1Malaysia has transformed from being the values espoused to material things of value given out to people, be it BR1M, KR1M, the 1Malaysia Clinics, meals, vouchers, etc, etc!

Unfortunately, whilst some Chinese may have bought into 1Malaysia in spirit and indeed DS Najib has grown in popularity as a person and an individual leader to the community, the problem is, teh Chinese for the most part do not need 1Malaysia products! What they have been asking for is an end in high level corruption and a reduction in crime SINCE BEFORE PRU12!

The Chinese Want To See An End To Major Corruption!

However, the BN campaign, full of fluff and feelgood factor and riding on the popularity of 1Malaysia and DS Najib personally never really got serious about addressing corruption in particular. Many Chinese are angry still of specific cases, such as the PKFZ scandal, which saw a raft of Chinese leaders including the former MCA President brought to court BUT NOT A SINGLE MALAY ACCOMPLICE CHARGED! So much for 1Malaysia!

Then, as if it was bad enough that only the Chinese get punished for big scandals like PKFZ supposedly, the Chinese and Malaysian Hero that caused the PKFZ scandal to be brought to trial, Datuk Ong Tee Keat, another former MCA President, was dropped from his winnable Parliamentarian seat of Pandan! Pakatan Rakyat was smart enough then to offer the voters of Pandan another anti-corruption hero to vote in as their MP, Rafizi Ramli of NFC fame!

As the problem of Corruption is seen by the Chinese nationwide, then of course, the Chinese chose to vote against Corruption, against BN, NATIONWIDE! Observe how DW Ali Rustam, so called hero and moderniser of the state of Melaka was defeated by a strong swing of votes against him especially by the Chinese in Bukit Katil. This was because his being an Icon of Corruption, by allowing his state agencies to part fund his child's wedding was corrupt!

There are 2 creatures on stage during the BN Victory 'celebration', very visible behind DS Najib - they are seen clearly in the photo above. The 2 creatures are the Icons of Corruption, Khairy Jamaluddin (KJ) and DS Shahrizat Jalil of NFC infamy. DS Shahrizat has no Parliamentary seat and I believe can no longer be a Senator, so best that she retire. The real problem is with KJ, who's lust for power sees him lobbying for a cabinet post in the press - TAK MALU BETUI!

The Chinese rejection of BN was able to mask also the rejection of BN by the young urban youth, in particular young urban Malay youths. They hate BN as the face of BN Youth is KJ. Whilst some may admire him at the outset of knowing him, many are then corrected by their elders by the retelling of KJ's corruption, such was his negative influence on Pak Lah's administration. DS Najib risks losing the support of ALL Malaysians by PRU14 if he chooses KJ!

Instead, DS Najib should give a clear signal to all by NOT selecting KJ. Give the signal such that UMNO picks up on this signal and also rejects KJ and the like. Let DS Najib's non-selection of KJ be the beginning of the re-birth of BN and UMNO! In PRU14, DS Anwar Ibrahim should no longer be a factor, but lets not have KJ as the new spectre to haunt UMNO and BN, driving it to oblivion.

And maybe hence when we are really cleaner for Corruption, we can begin to really cleanse the country of Crime, and the Chinese will return their votes to BN without need of any new rhetoric such as 1Malaysia...
Posted by Unknown at 1:38 am 3 comments: