Is The Klang Valley MRT Illegal? 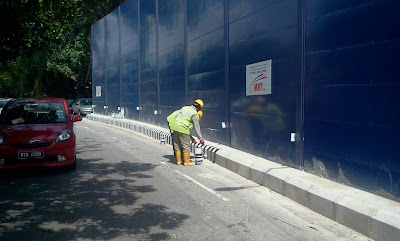 This blogger has been silent for a while and in part due to being restrained to silence as we have to respect the court case where the wife and 11 other plaintiffs on Pinggir Za'aba that is suing the MRT. This matter, despite being of public interest has been subject to effectively a mainstream media blackout, for which reasons readers are welcomed to assess.

Firstly let me confirm that the case is still on. Secondly, the interesting development today during Case Management is that the court will now hear arguments on whether the Klang Valley MRT is ILLEGAL in the eyes of the law! ILLEGAL!

Whilst for a few reasons this blogger is unable to share the laws and other details pertinent to the case that may lead to the MRT being declared ILLEGAL, the ramifications if the court judges it to be so is too damaging not just to the project, but all those intimately associated with it!

Considering the high risk now faced by the MRT project from this case, and the risk exposure is high even if MRT Co thinks they could win the case, it is shocking how badly they have managed this otherwise small and, originally, relatively low risk residents impacted, those in Pinggir Za'aba being generally pro-BN professionals and civil servants as well as retirees.

More will be revealed, though perhaps piecemeal by necessity, until court hears the case, at 9am on 11 September 2013. There will be much legal activity between now and then of course. Question is, considering the 'auspiscious' date, will the coming 9-11 be an avoidable tragedy for MRT Co?

Pic: Posted photo above is of MRT contractor 'beautifying' the 'blue ghetto wall' of Pinggir Za'aba.