WHO In The Selangor Government PROFITS From The Talam Scandal?

Of course Talam, or its new name Trinity Corporation, and its shareholders including TS Chan Ah Chye, his wife and Kumpulan Europlus (who in 2009 controlled Talam AND Europlus), profited. However, for a deal like this to happen, it is the Selangor government that should have seen a bigger profit. This was because Talam, before the deal, was a company in trouble. It had so much unpaid debt that it was delisted from Bursa Malaysia as a PN17 company or labeled in layman’s terms, ‘company with cashflow problems’! Surely the Selangor government could have made a better deal with Talam so desperate?

In 2006, Talam was already a company in trouble and about to be delisted. It used to have many, many 'friends' in the BN establishment, you could even argue these BN friends were the ones that got Talam into trouble in the first place! However, there came a time even these friends could not save it. Somewhere along the way of it trying to save itself, Talam converted some of its loans to preference shares, loan stock and Islamic financial instruments to the value of RM423.4 Million to Abrar Discount House. This was all done legally and would have remained innocent if Talam was not delisted from Bursa Malaysia then soon after!

However, with Talam delisted or made a PN17 company, all the RM423.4 Million worth of equity and financial instruments of Talam that was owned by Abrar Discount House effectively has no value! The value of all these Talam ‘financial paper’ was effectively zero because no one could buy or sell them on the open market with Talam being delisted. In addition to that, no one would want to buy them because Talam was immediately seen to be such a lousy company that was delisted!

So, Abrar Discount House was then holding all of this Talam paper with effectively zero value that they ‘bought’ for RM423.4 Million.

In 29 June 2009, something interesting happened. Kumpulan Europlus, a major shareholder of Talam also controlled by TS Chan Ah Chye, announced that it was buying all of the Talam paper from Abrar Discount House for RM125 Million. When the news came out, it was reported as being a good deal for Kumpulan Europlus, as it was buying RM423.4 Million worth of equity etc. from Abrar Discount House for RM125 Million, a 71% discount! However, there is just one problem. With Talam still delisted, still PN17, any of its financial paper would be worth zero! Including the ones Abrar Discounts House held!

So why would Kumpulan Europlus, and TS Chan Ah Chye, which already had control of Talam with its existing shares, pay Abrar Discount House RM125 Million for worthless paper that it does not need? Most Malaysians know that Abrar = DS Anwar Ibrahim. In fact, more accurately, Abrar = Dr Wan Hasni Wan Sulaiman = DS Anwar Ibrahim’s crony. At the same time, we know that DS Anwar Ibrahim is very influential in the dealings of Selangor government, being its ‘Economic Advisor’!

A few months after this RM125 Million payment from TS Chan Ah Chye’s Kumpulan Europlus to DS Anwar Ibrahim’s Abrar Discount House for its worthless paper, the Selangor government executed the many land deals with Talam now known as the ‘Talam Scandal’ in Selangor, that actually made Talam so much profit that it even left it financially liquid enough to be relisted in Bursa Malaysia! In fact, RM125 Million bought Tan Sri Chan Ah Chye a lot of support, as DS Anwar Ibrahim personally supported the deal when Pakatan ADUN’s voted for the deal in the Selangor State Assembly!


I suppose RM125 Million is too much money for even DS Anwar to ignore, as in supporting this deal, he actually backed up TS Khalid Ibrahim in his clash with then PKR Secretary-General Datuk Salahuddin Hashim. Datuk Salahuddin Hashim left PKR and began criticising DS Anwar some 2 months after the entire drama around Talam ended at the Selangor State Assembly. Ironically, TS Khalid Ibrahim now wants to appoint 5 separate audit firms to audit the Talam deal! I understand TS Khalid is not so close to DS Anwar any more, so, is this an effort for TS Khalid to reveal the truth behind the Talam deal?
So, the deal DS Anwar supported for Selangor State agencies to buy Talam water over land, buildings with no tenants on dodgy land, etc. is detailed with much complication here. How Anwar profits from the Talam Scandal is shown in the graphic below. Of course, this is very simplistic. We suspect more shenanigans than this as during this time, Talam was on the verge of being re-listed (so you can ask the confusing question of why Abrar Discounts wanted to sell the Talam paper!?) and Talam even lost an influential royal person as a Director and discontinued its relationship with highly reputable accountants Deloitte Kassim Chan! 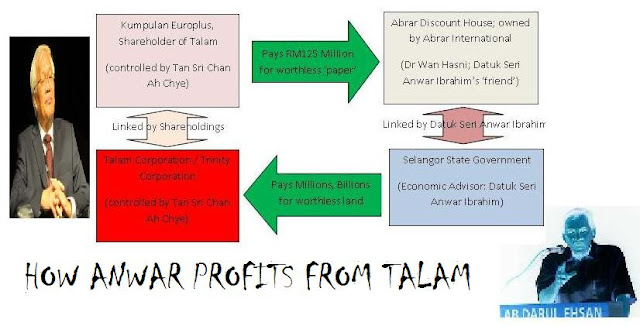 So, in short, Talam and its shareholders benefited from the Selangor Talam Scandal. However, someone with influence over the Selangor State Government also benefited from the Talam deal and allowed the deal to happen. The influential person who benefited on the Selangor side was its Economic Advisor, Datuk Seri Anwar Ibrahim with his cronies in Abrar Discount House. How much did they benefit from the deal? RM125 Million! Is it legal? Most likely. Is it right? Datuk Seri Anwar Ibrahim and his cronies getting RM125 Million cash whilst Selangor state overpays for land under water? Hell no!


But... the story does not end there! For the deal for Abrar Discount's Talam paper to go through, Danaharta had to be party to it. So who in Danaharta agreed to this and why? All legal we are sure, but...
Posted by Unknown at 11:30 pm 2 comments: