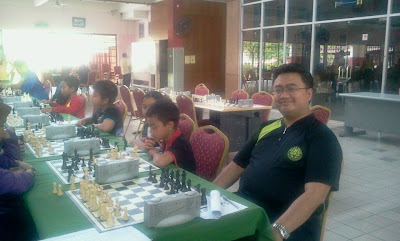 Today is a big day! OK, it is already a big day being one of this blogger's son's 8th birthday. However the same son woke this bloggers up early this morning declaring he wants to go for his first gift, a chess tournament today, where for the first time we will contest as a family team!


The photo above showcases the team as it stands now, with this blogger as team Manager and 'all-round' Ayah! The team's name, Nyanyak's Aces, is in honour of the all sacrificing Nyanyak of course! She has had to stay home to take care of our 'pelapis', but will join us for lunch.


Not sure if we would win anything, but we looked smug in the photo as at least we know we won't be last having won that (second) round. Points will be hard to come by after this with so many strong players! And the team manager sees this as a big day being the first Chess Tournament I've played in after some 27 years!


Hope I don't drag my kids down!

Email ThisBlogThis!Share to TwitterShare to FacebookShare to Pinterest
Labels: Chess

An 8.6-8.7 richter earthquake struck off the west coast of North Sumatra estimate at around 16.37 hours Malaysia time. This blogger was alerted of tremors from as far as Pasir Salak, Perak where residents felt the ground shift. The lastest news from Acheh indicate residents fully aware of the risk leaving coastal areas for higher ground to avoid the risk of a repeat of the 2004 tsunami which left around half-a-million Achehnese dead.

Whilst Malaysians enjoy the remainder of our holiday celebrating the installation of our new Agong, please lend a thought for those neighbours of ours who may be facing tougher realities and challenges as we speak. A doa too all affected. And should the need arise, may Malaysians once again show our exemplary traits of giving and sacrifice for those in need, such as repeatedly shown over these many years.
Posted by Unknown at 3:03 am No comments:

The False Redemption Of Shahrizat Jalil

The NFC Saga continues its damage of UMNO and BN's chances of securing a convincing win in the coming General Election despite the departure of DS Shahrizat Jalil from her cabinet post. Even Rafizi Ramli, the unlikely whistleblower of the scandal, acknowledges this through his gleeful tweets over the course of the weekend - if Shahrizat's departure was to bring the NFC scandal to a close, Rafizi's behavior would have been more subdued.

Some weeks ago this blogger blogged on how the NFC, and substantially the complicity of Shahrizat as a Cabinet member and UMNO Wanita Chief in the wrong-doings, would have an effect on the General Election. One may imagine that with Shahrizat no longer being in the cabinet that the matter is resolved, but truly it is not. As the issue of credibility remains a stain unerased, just as Shahrizat is not really out of the corridors of power.

The salient point that needs to be discussed first is, does Shahrizat remaining as Wanita Chief affect its capability to deliver votes in the coming PRU13? Answers this blogger gained from 2 separate government agencies is that it has a very negative impact on Wanita's effectiveness as a critical component of BN's election machinery. As with its leader seen as being so morally bankrupt, Wanita losses its credibility.

In fact, Wanita risks not just losing its credibility, but also its unity, as pro and anti-Shahrizat factions jostle around the future of their disgraced Chief. And with loss of unity, Wanita will surely disintegrate into parts of which the sum of cannot compare to the sheer effectiveness of a one united party wing. Indeed, Wanita UMNO may even struggle with the question of relevance of Shahrizat's continued leadership is allowed to further stain its reputation.

The reality is that Shahrizat may have been spared any suspicion even if her husband was not simply accused but was then successfully prosecuted for Criminal Breach of Trust in the handling of the NFC initiative. Many, even world leaders, have suffered errant husbands in the past. Even when it is revealed she did not block the involvement of her children as paid managers of NFC, Shahrizat could still have been painted with a shade innocence.

However, any illusion of innocence was completely shattered when she used her highest party platform, the 2011 Annual General Assembly of Wanita UMNO, to defend her husband and children and their suspected corruption of the NFC. It was said that her defence was so emotional, that she could not finish more than half of the prepared text, or more importantly, failed to convey the priorities of Wanita UMNO coming into a likely election year.

So Shahrizat over the course of one UMNO AGM speech, personified all that is wrong about the party today. She showcased how the power and position afforded to her by the party could and was willingly used to defend and perhaps indeed enhance private interests. And in her selfishness which is more reflective of a lioness protecting her cubs than a leader staying above the fray, she pushed Wanita to the edge of a precipice, where it remains.

So many lauded Shahrizat's announcement that she was 'withdrawing' from her Cabinet post some weeks ago. This was of course Shahrizat at her politically most cunning, where she pre-empts being naturally 'dropped' from her post when her Senate tenure was up, allowing her then to attempt to selfishly cling to the more important Wanita UMNO Chief post. And so she clings on with claws that tear fresh wounds into Wanita.

However, it is not the population of pre-independence Malaya that Shahrizat is trying to convince that she is redeemed with her fake 'withdrawal'. Almost every educated person this blogger met following the news expressed disgust at how Shahrizat's 'withdrawal' was lauded by even the TPM as a 'sacrifice' - it was probably one of the worst pieces of media-spinning since the Pulau Batu Putih win-win nonsense! All EXPECTED Shahrizat to be dropped anyway.

That DS Najib as Prime Minister was compelled to take on the Women Affairs Family and Community Development Ministry rather than appoint another Wanita leader to the post is testament to how dire things look for Wanita UMNO now. Battle lines are clearly drawn with unity being threatened, with Shahrizat accusing those who simply want her to do the right thing; i.e. resign. But Shahrizat doesn't dare to resign, as in the end, she's no leader.

If Shahrizat was a true leader, she would do the right thing without the asking. She would have resigned the moment she saw that, as evident to everyone else, something was wrong with the way the NFC was run. In fact, if she was a leader she may even have asked her husband to stay away from the NFC. Certainly as a leader and a responsible mother, she should have kept her children well away from the NFC, which is NOT a family concern!

Well, as it should be abundantly clear to Wanita that it doesn't really have a Leader as its current Chief, rather than suffer further and longer to the point of obliteration due to 'Shahrizat's False Redemption', its true leaders should step up and shove Shahrizat out! The Wanita exco can certainly call for a no-confidence vote, and should do so before someone in the Supreme Council musters the guts to do so. It is the right thing to do.

For in the absence of a true Leader as its Chief, Wanita has to move quickly to redeem itself among its stakeholders, especially all the women that are its constituents in the electorate. It is the right thing to do. And that is what Leaders are chosen to do, to DO THE RIGHT THING.
Posted by Unknown at 10:22 pm No comments: