Our former DPM, Dato' Seri Anwar Ibrahim, (otherwise known as the 'KJ Idol' or the 'politician otherwise known as DSAI' on the net), admist his blatant attacks on the man he sees as his biggest obstacle to returning to UMNO, and power, the current DPM, has chosen to raise the anchor of another boat's issue to lend him 'credibility' by:

Well seeing DSAI's antics and with myself getting a little sick of the new ridiculous act of 'management' in Proton, akin to gorging on a sour Cherry in the hope of patching up large tracks of missing 'grey cells' involvement in past decisions, I thought I'd take a Tangent even from my last take on 'the boat': (http://thoughtsintangents.blogspot.com/2006/12/about-boat.html)

I say we Malaysian should all stay focussed to avoid us ending up in a boat like this: 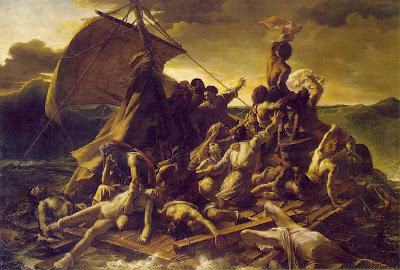 This is "The Raft Of The Medusa" by Theodore Gericault, by far my favourite of all the pieces of art on display at the Louvre in Paris.

Note that it does qualify as a 'boat' as it appears somewhat seaworthy enough to carry some people, though just barely.

It is of course nothing like the supposed "Yatch of Pak Lah" or the RM30 Million boat.

My attraction to this painting isn't just due to its apparent morbidity (which is kinda cool), the artists' wonderful use of colour and technique (which, being an engineering graduate, I don't really think I have the tools to comprehend) or because I could admire it in peace whilst every other tourist were scrambling over each other to glance a snapshot of the Mona Lisa (my wife's more of a babe anyway).

What attracted me also was the history underlying the painting, as it was actually a record of the last hours before the rescue of an incident involving the French vessel Medusa in the 1800's. Here's a Wiki:

The history behind The Raft Of The Medusa is actually that of management incompetence. The incompetence of the French Bourbon government in appointing the frigate Medusa's Captain. The Captain's inexperience and incompetence leading to the ship being grounded. Then the rather pathetic efforts to save the survivors of the wreck, leading to a disaster and scandal which deservedly rocked the French government of the time.

Read excerpts from wikipedia (with edits for clarity of my message):

"The French Ministry of the Marine made the mistake of appointing inexperienced Frigate-Captain ... to lead the fleet. He had mainly worked as a customs officer more than twenty years previously and had worked against Napoleon. His crew did not particularly appreciate him, because they had served with Napoleon during his reign...

The fleet left Port de Rochefort on June 17. Medusa sailed quickly away before the rest of the fleet. On July 17, the Captain... ran the ship aground.

At first the crew tried to release her by throwing heavy items overboard, but (the Captain) stopped the effort....

Eventually he decided to abandon ship. Because there were only six lifeboats, he made a raft out of masts and crossbeams to carry the rest of the crew. Dignitaries – 250 of them – took the lifeboats and attempted to tow the raft. The raft was too flimsy to keep all the rest (149 men and one woman) afloat. Seventeen men decided to stay on Medusa. The rest were left with no food and water to speak of.

Those in lifeboats soon noticed that the idea of towing the raft was impractical. (The Captain) decided to cut the rope and leave the rest of the crew to its fate, four miles (6 km) off shore.

On the raft, the situation deteriorated rapidly. Men began to throw wine and flour out of spite and fight among themselves. On the first night 20 men – whites and Africans, soldiers and officers – were killed or committed suicide. Rations dwindled ever more rapidly and on the fourth day some on the raft resorted to cannibalism. On the eighth day, the fittest began throwing the weak and wounded overboard.

Thirteen days later, when (the ship) Argus found the raft almost by accident, there were only 15 survivors remaining. Five of the survivors, including the last African crew member, died within days. Three of the seventeen men that had decided to stay on the Medusa were later recovered alive. British naval officers helped the survivors to return to France because aid from the French Minister of the Marine was not forthcoming."

A 'nice' metaphor and cautionary tale for our times in Malaysia no? What with the out of control increases in cost of living, the selling off of national assets, the instigation of racial tension and with the USFTA coming up to boot! Interpret the history behind The Raft Of The Medusa in the current Malaysian context as you wish... lets just not end up in THIS kind of boat...
Posted by Unknown at 7:57 am

Email ThisBlogThis!Share to TwitterShare to FacebookShare to Pinterest
Labels: boat, Pak Lah, The Raft Of The Medusa, yatch

What a timely piece. This country of ours is going to the dogs - why because there is no leader, or the leader is not qualified to lead. Only God can help this country.

Very insightful post! I am eyeing to be one of those in the life boat. What about you, Oh the one with plenty of insight?

Don't blog abt fickle issues that some of us are already enlightened with. Hang nie pro Najib aka 'corrupt' sangat ke? also tak abih2 the 4th floor. All politicians have their own sadistic version of spindoctors to spare. filthy political party to the max. i dun need stupid connections with you uhuk2 datuk2 bangsats to run an entrepreneuring business.. bottem line!