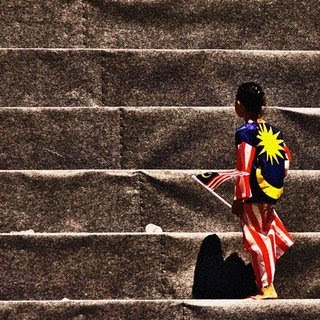 As a lover of history, I am appalled by the running results of the current poll being run by the Star Online. Assuming the poll results are legitimate, at this point, it show Malaysians giving equal footing if not greater importance to Malaysia Day (16 September) than Merdeka Day (31 August). Obviously this is in large part due a succesful propaganda campaign by Pakatan, especially PKR, that carry the view that Malaysia Day is 'fairer' to Sabah and Sarawak.
Unfortunately, this bit of propaganda, however succesful, is based out of a falsehood! For many who have chosen Malaysia Day as the more important day, the view is formed of the belief that 16 September was the day Sabah and Sarawak achieved independence via Malaysia. Actually, the truth is that 16 September is only the official date of the formation of Malaysia, whilst Sabah and Sarawak achieved independence from British rule a little earlier!
Sarawak actually gained independence on 22 July 1963, whilst Sabah, interestingly, was declared independent as North Borneo on 31 August 1963! The formation of Malaysia was originally planned for 31 August 1963, to coincide with the independence of Sabah and Singapore, however, it was postponed to 16 September whilst a diplomatic solution was being sought to address opposition to Malaysia's formation by Indonesia and the Philippines.
That Malaysia Day happened on 16 September was hence an accident of regional politics, however, 31 August carried greater significance, at least for Sabah and Peninsular Malaysia. It was hence decided together, in unity, by parties from Peninsular, Sabah and Sarawak, that 31 August should be celebrated as Merdeka Day, whilst 16 September be declared Malaysia Day in honour of the formation, but would carry far lesser weight due to the history leading to the date.
And now, some 52 years after independence of Malaya and 46 years after the independence of Sabah and Sarawak, followed by the formation of Malaysia, for the sake of politics, ignorance is fanned across the masses! Much of leadership relies on history, often said to avoid past mistakes, but more importantly so we know where we came from and how our values as a nation came to be. Certainly politics is no good reason to trample upon our history as a nation.
And why is Merdeka then more significant a date for all 3 parts of the Federation that is Malaysia? Because Merdeka is the day we threw off the oppressive yoke of the English and became a free nation. This is surely more momentous to any part of Malaysia than the coming together of the parts! It is also better to celebrate grandly on the date when we originally chose to form Malaysia, than on a date forced upon us by powers opposed to our formation, that is 16 September.
If Pakatan is ever to come to lead Malaysia as a nation, it should first learn to respect history, as history is a large part of what defines us as a nation. Twisting history into propaganda simply for the pursuit of power, is disrespectful of our ancestors and disenfranchises our descendants of the truth of who we are. Unlike politics, our history is sacred to the nation, and it would do well for us to know it in case those irresponsible choose to lead us astray for their own gains...
NB: Please note I have used well referenced Wikipedia pages to back the above historical dates, in an attempt to balance the younger generation's irrational level of trust of Wiki with presentation of historical fact.
Posted by Unknown at 6:17 am