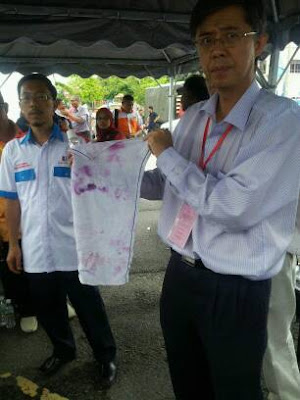 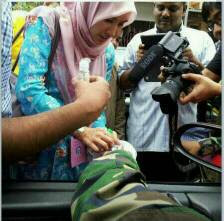 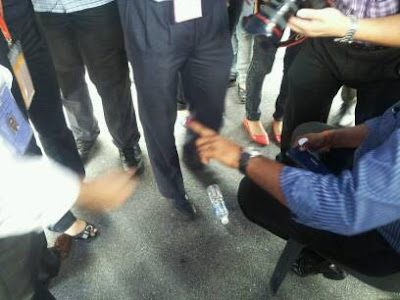 Earlier today, an attempt was made by PKR leaders Tian Chua and Nurul Izzah Anwar to prove that the indelible ink used by SPR can be removed. To do this, they attempted to remove the ink off the finger of an army personnel that had just performed a postal vote.

THE ATTEMPT FAILED! Whilst ink was partially removed, only 30-40% of the ink actually came off. THE REST OF THE INK ACTUALLY REMAINED ON THE FINGER, with the stain easily discernible by anyone examining whether a voter has voted at the polling centre. And this with considerable time and effort spent on removing the stain!

Of course, despite their failure, we expect PKR and their Pakatan chums will likely sensationalize and spin the whole matter. Note the pics here would of course show their 'heroes' and their attempt, however, the more important image is that of the finger STILL MARKED BY INK DESPITE THEIR EFFORTS!

More importantly for me are questions that their attempt leave unanswered such as:

1 - Why do they spend so much effort on discrediting the internationally acknowledged indelible ink method to ensure the sanctity of our votes when they should be focussing on getting votes, especially as both Tian Chua and Nurul Izzah are losing?

2 - Is this yet another symptom of their realising Pakatan is about to lose PRU13 and their preparing the excuse for their supporters and international backers?

3 - Uhmmm... How do we know the guy they did the test on really was a postal voter? And wouldn't SPR use a different colour come polling day?

Aiya, even these questions give me doubt whether these 2 Pakatan candidates deserve a vote! Focus on getting votes la, focus on what voters want! Not focus on excuses on why they might lose before ballots are even cast!

The last few days for UMNO Cyber Troopers to earn their salary ... beyond the 6th May, many will not be paid any more allowance .... and they will probably be the most frustrated group of UMNO supporters,

When their political masters disappears, the mangy dogs will no longer receive their pay, as the funds originating from the Govt coffers will run dry ... and they are left abandon to fend for themselves .....

the days of the UMNO Cyber Troopers are coming to an end, sadly they have not realised that they have been used and will no longer be usefully employed beyond the 6th May ....

Such a waste. A well constructed reply but coming from an idiot. Well you can't expect an idiot to tell which is a cybertrooper-like blog entry and which is FACT.

The older folks will tell you there were 1001 types of madness. There were also 1001 types of stupidity. Pick one and viola! you got one just like the anon 3.15.

PEOPLE ARE NOT BLIND.

DAP Kulangkabut oredi. The chinese boy from their red bean army pecah libang alot. Later on corruption story iso wl cime out. Mati la Guan eng. Lu apak iredi kena booo in nusajaya. Now evyone got no time for racial politic. Evryone nd to cari mkn. any land in the world beling to god. he only appoint ppl to look after. u behave well anywhere oso can stay. but dont kurang ajar n want more than what u deserve la. U sleep in d guest room. the owner sleep in master bedroom la. Politics of envy is not good. only brings chaos.