It is very strange what has happened at MIC. They have an immensely unpopular President, outside of satire that is, yet, in the greatest traditions of what appears to be a disturbingly increasing norm among BN component parties, DS Samy Vellu retains the faith of the party's divisional leadership and delegates, as indicated by the election of only his endorsed candidates at its recent AGM!
DS Samy Vellu's longevity as MIC President has been said to be due to many things, including:

Why do I say this? In my view, the Indian community has been tossed about by political forces far too easily over the last few years. This in turn is symptomatic of a community that struggles with:

So to my own question, whether MIC is in real trouble now, I would say yes it is! With DS Samy's grip on the party clear, the community may give up on a political solution to its woes and look for alternatives. The alternative may be political, but in this case, DS Samy's likely right in guessing an Indian political rival to MIC is some years in coming. However, Indians may choose to move primarily through community NGOs, like the Chinese, which would risk making MIC an irrelevance.

That Hindraf rose to prominence so quickly, putting aside its racist rhetoric, dramatic claims and mob behaviour, is indicative of not just the role NGOs can fulfil but also the readiness of the Indian community to support them! Support for the Kampung Buah Pala Residence Association's efforts is another. 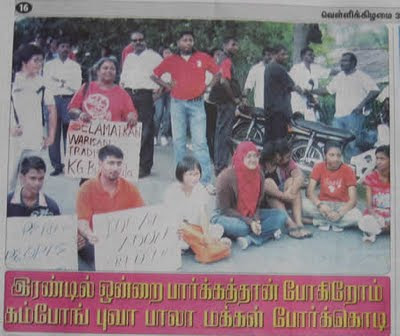 The saving grace for MIC is that it is attempting to cap its troubles with some key constitutional amendments, such as to the President's term in office, and at least it is ahead of PPP with regards to its Youth Chief, who is the community's choice, not DS Samy's and is smart enough not avoid silliness like asking the government to make the UMNO Youth chief a minister! However, it has to do something to bridge the high risk period which is the now to the future.

I am glad though that DS Samy, for all his faults, does retain a good political head on his shoulders. It is smart of him to allow others, mainly junior reps of the party, to respond against Tun Dr M's recent comments against his leadership... and smarter still for defending Tun Dr M after...

Let them boot Samy and MIC out of BN because Samy and MIC do not know how to quit. There' too much to cover up and Samy doesn't want the truth to emerge!

The Indians don't f..king care. They moved on to Hindraf and the Oppostion a year ago.

dpp
We are all of 1 race, the Human race