I'll begin first by thanking my good friend and occassional mentor, Ahiruddin "Rocky" Attan, for highlighting Pinggir Za'aba's suit against MRT Co. This suit is very much a private matter to the plaintiffs, my wife being one of them. I also thank those who have commented for and against the suit in Rocky's blog and hope they continue their interest here.

For those who have misunderstood Rocky's definition of Elite, please have a look at the images of the houses of most of the plaintiffs on Pinggir Za'aba that I have attached below. Pinggir Za'aba is a long road, just as TTDI is a large housing area. The part of TTDI directly effected by the MRT has neither bungalows nor semi-D's and whilst we are not the poorest of citizens, we are not among the most affluent either. We are Elite though, in that we are nearly all tertiary educated, most are or were professionals, managers in corporations or civil servants. 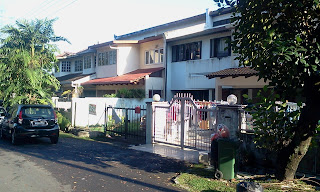 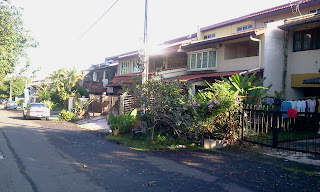 Having heard the views of many, allow me to present my reason for supporting my wife's decision to join the civil suit against MRT Co. Metaphorically and in brief, I can say that the reason for my support of the suit is from my reading of Clausewitz's On War, where the great Prussian military philosopher describes War as simply the continuation of Politics or Policy by other means. Hence, this suit, is simply the continuation of Pinggir Za'aba's engagement of MRT Co by more aggressive means.

To elaborate on the why, ever since residents of Pinggir Za'aba were informed our homes would be impacted by the MRT's construction by notices put up on trees along our road by SPAD some 2+ years ago, we have been trying our best to engage various government agencies. Understanding that the MRT is a nation-building project of some importance, we have never asked for it to be scrapped, but rather preferred re-alignment or an underground route for it, and failing that, that were at least hoping to be given due compensation either for damages to or for having to abandon our homes.

The PR and engagement from SPAD and Prasarana was to me actually quite poor, though I would put more blame on SPAD for this - Prasarana seemed in these engagements as being victims of circumstance. SPAD's position was often inconsistent, its approach to engagement shoddy (beginning with notices put up on trees remember!), but at least there were no empty promises. Where they could not deliver on our suggestions of hopes, we received non-commitals and silence, which sounds bad, and may even sound strange for those who went to the PR 'roadshows', but worse was to come.

The worse that was to come was from the empty promises of the CEO of MRT Co himself, who in return to our peaceful and quiet discussion with his team, assured us that he had the mandate to ENSURE the government would treat us residents of Pinggir Za'aba fairly. This promise was made some 2 years ago, at a time when we still had options to sell, rent, temporarily move or at least plan for the coming of the MRT. Unfortunately, Datuk Azhar of MRT Co was not able to deliver, and a couple of months ago, his PR Director, Amir Mahmood, even closed all avenues of engagement with us.

Details of this will come out in court soon we hope, but in the end, the plaintiffs are suing MRT Co as they have no other choice. As the agency charged solely on this matter, MRT Co has curtailed all avenues of engagement and even the Media has had to tip-toe around this issue. Some wondered why I used my father's Tan Sri title in the press release - it  is to clearly showcase that the suit is being brought by BN supporters against a BN project. It is not political - the plaintiffs are not politicians. They are aggrieved citizens that have a case. They need the government to listen.
Posted by Unknown at 8:28 pm

No one likes to be in the TTDI Residents position.

From my reading from a number of blog postings relating to this matter, I can't help but wonder, whether Najib has actually been properly briefed on this matter concerning PZ12's plight and other related parties whereunto the MRT-line will run in close proximity to these affected homes. It is common knowledge the tally is about “292 affected homes”. For a mammoth project (such as our MRT-line), it would not be unrealistic for acquisition of properties along the entire 51km to be sizeable i.e.: around 10% of the total projection costing. Anything below that 10% figure will be a bonus (in comparsion with other similar MRT projects near and abroad). On our front, I will not be surprised, if the total compensation (PZ12 and other similar areas affected by the MRT-line) that it will be anything MORE than LESSER THAN A FRACTION of ONE PERCENT of the total MRT Project. How much is SPAD and other related parties gaining from this MRT Project, I wonder? On the impending law suit, what needs to be considered would be: How much “fund allocation” is needed on compensation as opposed to court proceedings? AND also to weigh this: Who actually wins? Is it not the ONES who “milk” the cows? I’m referring to lawyers who milk the cow (not that PZ12 or MRTcorp are cows!!). Perhaps, it may be a good idea for a friendly “party” to come in to broker for this whole exercise: To see if there is any “avenue” that can be re-visited or explored such that this may be “amicably” resolved on a “win-win” basis. If “MONEY” is the main consideration, I believe that something can be done to settle matters. For example, MRTcorp gives the aggrieved parties 3; THEN, the aggrieved parties give to MRTcorp 2 and so forth and so forth. Something like that. This way, EVERYBODY wins…. Following MRT’s progress, a fairly considerable amount of MONEY would already have been spent on road shows to win public's support (rightly done so, this is a good strategic move). What more, to aggrieved parties within the protected Railway Protection Zone.